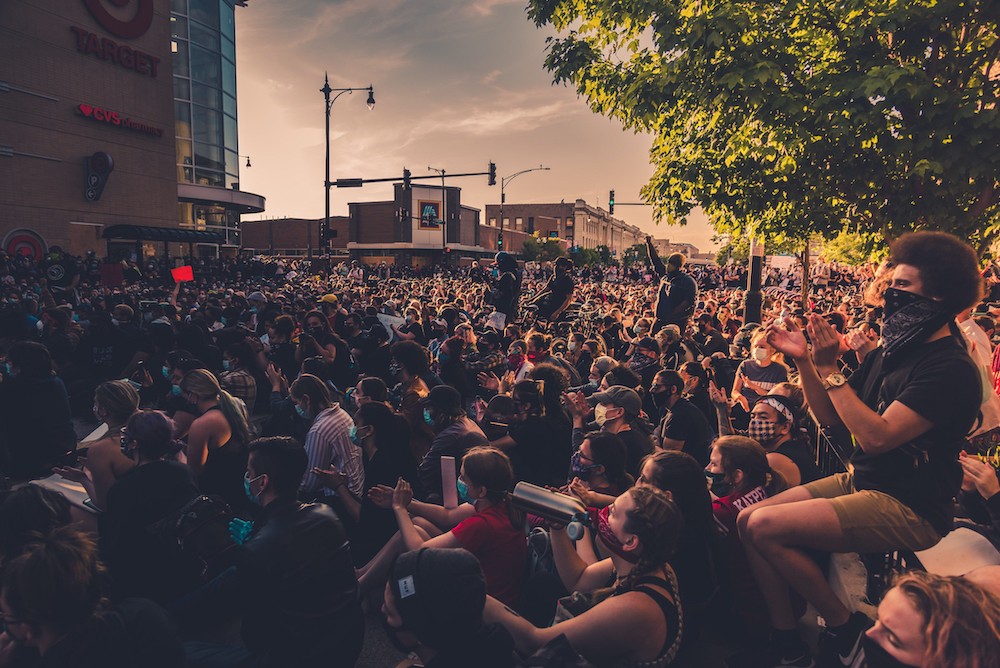 For the past two weeks, protests against police brutality and racial inequality that were sparked by the police killing of George Floyd have been continuing across not only all 50 states, but around the world.

The power of the movement was undeniable, and corporate America felt compelled to respond in some way. In that first week, we saw corporations and brands quickly release a statement against racism, and many made donations to civil rights groups. As the protests continued into the second week, more companies, including those that had already made an initial response, took actions that felt weightier and longer lasting.

This has been the first time that companies have embraced the Black Lives Matter movement en masse. As the New York Times reported, the majority of American voters were opposed to BLM when it started in 2013, and also believed that racial inequity in criminal justice was not an important issues – the opposite is now true.

A survey from JUST found that the large majority of Americans either somewhat favored or strongly favored CEOs responding to the protests with a statement about ending police violence (84%), promoting peaceful protest (84%), elevating diversity and inclusion in the workplace (78%), condemning racial inequity (75%), and condemning police killings of unarmed Black people (73%).

Campaign Zero cofounder DeRay Mckesson, who rose to prominence in the 2014 Ferguson protests, told JUST that while he found some businesses’ responses to the Floyd protests “lazy” and wanted to see lasting action, he said that some of these statements have helped take away the sensationalism around something he finds isn’t sensational, i.e. fighting against systemic racism and for police reform.

At JUST Capital, we think that any response is better than silence, and it is difficult to have a definitive “best of” list, as we’re comparing companies across different industries and sizes. We are, however, highlighting responses that in some way change how a company operates, and that feels true to accompanying statements. We have also noticed criticism of companies that had follow-up responses to their initial actions, with allegations that they were “forced” to good behavior through either internal or external pressure; we instead celebrate companies that listen to their stakeholders and respond accordingly.

Our six years of polling the American people have shown that the public demands that corporations recognize their responsibility to their communities, their workers, and their customers. When executed well, a response to the protests can be a meaningful step toward fighting systemic racism.

We’ve collected notable corporate responses, as well as personal calls to action from Black business leaders. It is not a definitive list, but one that shows responses with ramifications that have the potential to outlast the moment we’re living through. Some actions we’ve selected are part of a larger package. We have linked to the full release for each of them. We will update the list as necessary.

The Quaker Oats Company, a subsidiary of PepsiCo, announced it was ending its Aunt Jemima breakfast foods brand. Mars Inc. told JUST Capital that “now is the right time to evolve the Uncle Ben’s brand, including its visual brand identity, which we will do,” with further details to be determined.

PepsiCo also announced a five-year, $400 million initiative that includes the goal of increasing Black managerial representation by 30% and more than doubling business with Black-owned suppliers.

Airbnb launched “Project Lighthouse” in partnership with civil rights organizations, which includes a team dedicated to investigating and preventing discrimination on its platform through new policies.

Adidas, which also owns Reebok, committed to filling 30% of new positions with Black or Latinx workers.

Bank of America announced a $1 billion, four-year commitment to strengthen economic opportunities in communities of color.

PayPal is committing $530 million to supporting Black-owned and minority-owned businesses in the U.S., as well as bolstering its internal diversity and inclusion practices.

Comcast has dedicated $100 million over three years toward diversity and inclusion efforts, including grants to and partnerships with civil rights organizations, accelerated D&I hiring and training practices, and an enhanced focus on Black creators and issues of racial inequity across its media platforms.

IBM has stopped investing in facial recognition software used by police forces, Microsoft will no longer share its version with the police, and Amazon will stop sharing its software with police for a year.

Nike, Twitter, Square, the New York Times, and Vox Media are instating Juneteenth, a celebration of Emancipation, as a paid holiday.

Ben and Jerry’s, a Unilever brand, committed itself to supporting the fight against systemic racism, including through the advocacy of a bill investigating slavery reparations and a bipartisan task force into police reform – on top of its continued financial and advocacy support of Black Lives Matter and criminal justice reform.

PwC is creating a D&I Staff Advisory Council and will begin this summer releasing a new diversity plan and regular updates, among other actions.

Sephora signed the “15% Pledge” and committed to devoting 15% of its shelf space to products from black-owned businesses.

NASCAR banned the Confederate flag from appearing at its races.

On the content front, Netflix added a permanent Black Lives Matter genre to its service, celebrating the work of Black creators and Black history, Paramount Network canceled the show “Cops,” and HBO removed “Gone with the Wind” from HBO Max, and will re-upload it with historical context added. CNN and the Sesame Street organization teamed up for a town hall for kid that explained racism and how to stand against it.

GM CEO Mary Barra is creating an Inclusion Advisory Board to work on increasing diversity and inclusion at the company.

PVH created a task force across its apparel brands to determine what actions can be taken to be more inclusive of its Black employees, created an internal antiracism resource, and donated to multiple civil rights organizations.

Google has set a target to drastically support Black executives, and achieve at least 30% minority representation on their executive team by 2025.

Vista Equity Partners CEO Robert Smith wants companies to develop new talent pipelines to accelerate internal diversity: “We’ve seen a dampening of the number of African-American CEOs of Fortune 500 companies versus when I was coming out of school in the ’80s. And it’s because there hasn’t been the developmental pipeline that there has to be. And like in all businesses, you have to create the pipeline.”

Ford Foundation president Darren Walker wants companies to fully embrace stakeholder capitalism over shareholder primacy: “More is going to be demanded of corporations, and more should be demanded, because they have a tremendous influence on how we live our lives.”

Ariel Investments co-CEO Mellody Hobson wants companies to stop saying they’ll look into the matter of diversity and inclusion, and instead immediately take action: “Saying you’re working on diversity is not acceptable. You don’t work on anything in corporate America. You either do, or do not.”

Robin Hood CEO Wes Moore wants performative actions to end: “We’ve been satisfied by putting [Black investor] John Rogers on every board. But we haven’t been deliberate about building bench and pipeline.”

Former Xerox and VEON CEO Ursula Burns says companies must diversify their boards: “Before you even look at the companies, look at the boards. Most of the boards still have zero or one African American on board, and that, I think that pressure in that area, can help to speed up progress and transitions for companies.

Liz Kneebone and Nick Masercola contributed to this article. This was most recently updated on June 30.

Activist DeRay Mckesson: If You Take Black Lives Matter Seriously, Now Is the Time to Step Up As a Corporate Citizen