Last week, JUST Capital released a report exploring what types of financial assistance America’s 100 largest employers – monitored in our COVID-19 Corporate Response Tracker – have provided to their essential workers to compensate them for putting their health at risk and help mitigate financial instability during the pandemic. We found that 20 companies announced temporarily increasing hourly wages or offering hazard pay, and 18 companies announced providing one-time bonuses to their employees. Our analysis also posited that companies that are financially able to do so should prioritize increasing hourly wages over providing one-time bonuses. In this piece, we unpack this argument in depth.

At first blush, bonuses seem to give workers access to much more cash than a temporary bump to hourly wages. Having this cash upfront can help workers cope with unexpected expenses that arise due to health emergencies, shifts in employment status, switches in child care arrangements during school closures, or other changes to financial circumstance during the pandemic. But as demonstrated by the chart below — which was also featured in our report — the longer-term outlook is different: Over time, the cumulative earnings from a temporary wage increase outpace those from a one-time bonus. 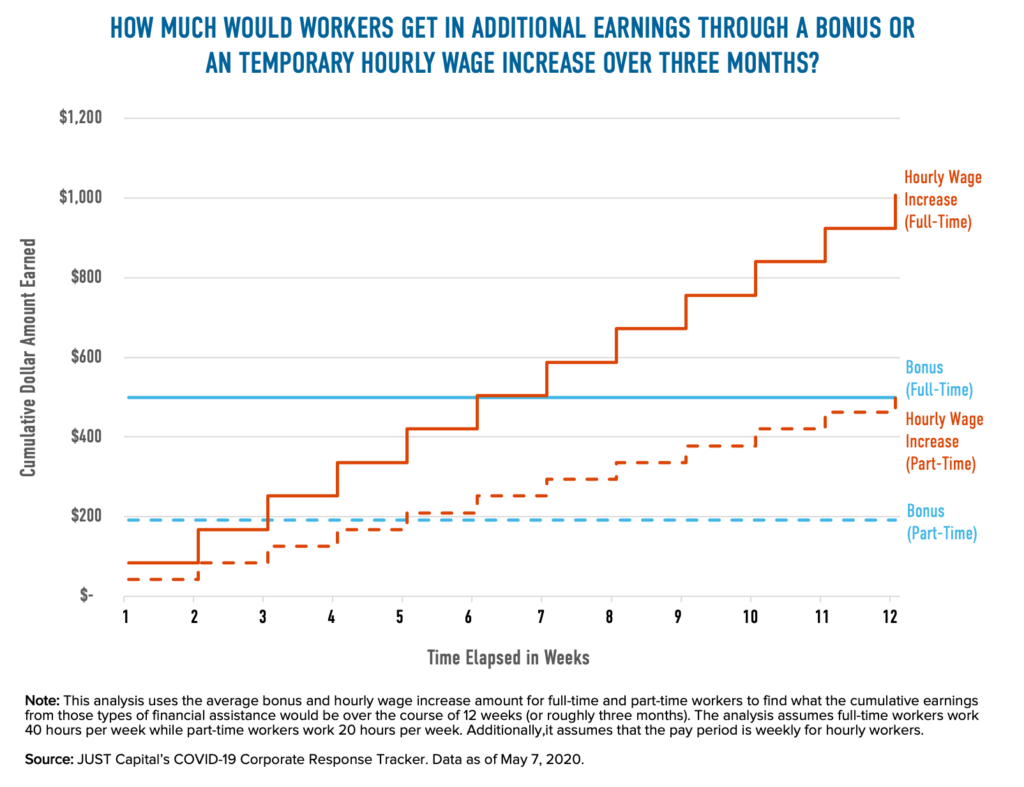 The hypothetical example illustrated in the figure above uses (1) the average one-time bonus amount and (2) the average hourly wage increase amounts for both full- and part-time workers to chart what cumulative earnings under each financial assistance program look like over a three month horizon.

In deciding between following the plans set up by Company A (bonuses) or those implemented by Company B (temporary wage increases), companies are implicitly being asked to think about whether COVID-19 will have short-term impact on their businesses and workers or a long-term one.

There is a lot of uncertainty around how the COVID-19 pandemic will continue to play out, but many experts have speculated that the crisis will have long-term impacts on public health, our economy, and many other dimensions of our daily lives. In an outstanding example from our analysis, Charter Communications announced that it would increase the wages of its hourly workers to $20/hour permanently by 2022, while many other companies’ pay increases are set to expire this month. Given these long-term impacts, however, companies that are contemplating between the two actions or are financially able to do so should consider increasing workers’ hourly wages – and consider making these increases permanent.

The COVID-19 Corporate Response Tracker: How America’s Largest Employers Are Treating Stakeholders Amid the Coronavirus Crisis

The JUST Report: Your Business Is Only As Good As Your Workforce